Ausitn BCycle, a docked bicycle renting program, expanded in early 2018. The new 9 kiosk locations combined with a new free membership for UT Austin students is changing how students get to class from West Campus.

Austin BCycle opened in 2013 with an initial rollout of stations across the downtown area. In 2014, BCycle broke bikeshare records for the most amount of bike checkouts in a single day during SXSW. The placement of the checkout kiosks was focused at large tourist destinations such as the convention center, South Congress, Rainey Street, and Barton Springs. From February 15 to May 31 2017, 49% of ridership was for walk-up rentals and 23% was a yearly pass which currently valued at $80.

In February 2018, BCycle opened 9 new stations around and on the UT campus. Previously, there were only 2 kiosks near the campus along The Drag. BCycle also announced the release of a free UT student membership, which allowed students to check out bikes for free up to an hour.

One of the questions I had was, how has the BCycle student membership changed transit across Austin? Were more students cycling to Sixth Street on Thursday nights for free, were they opting to hop in an Uber, or hitch a ride on the frequent and free E-Bus? 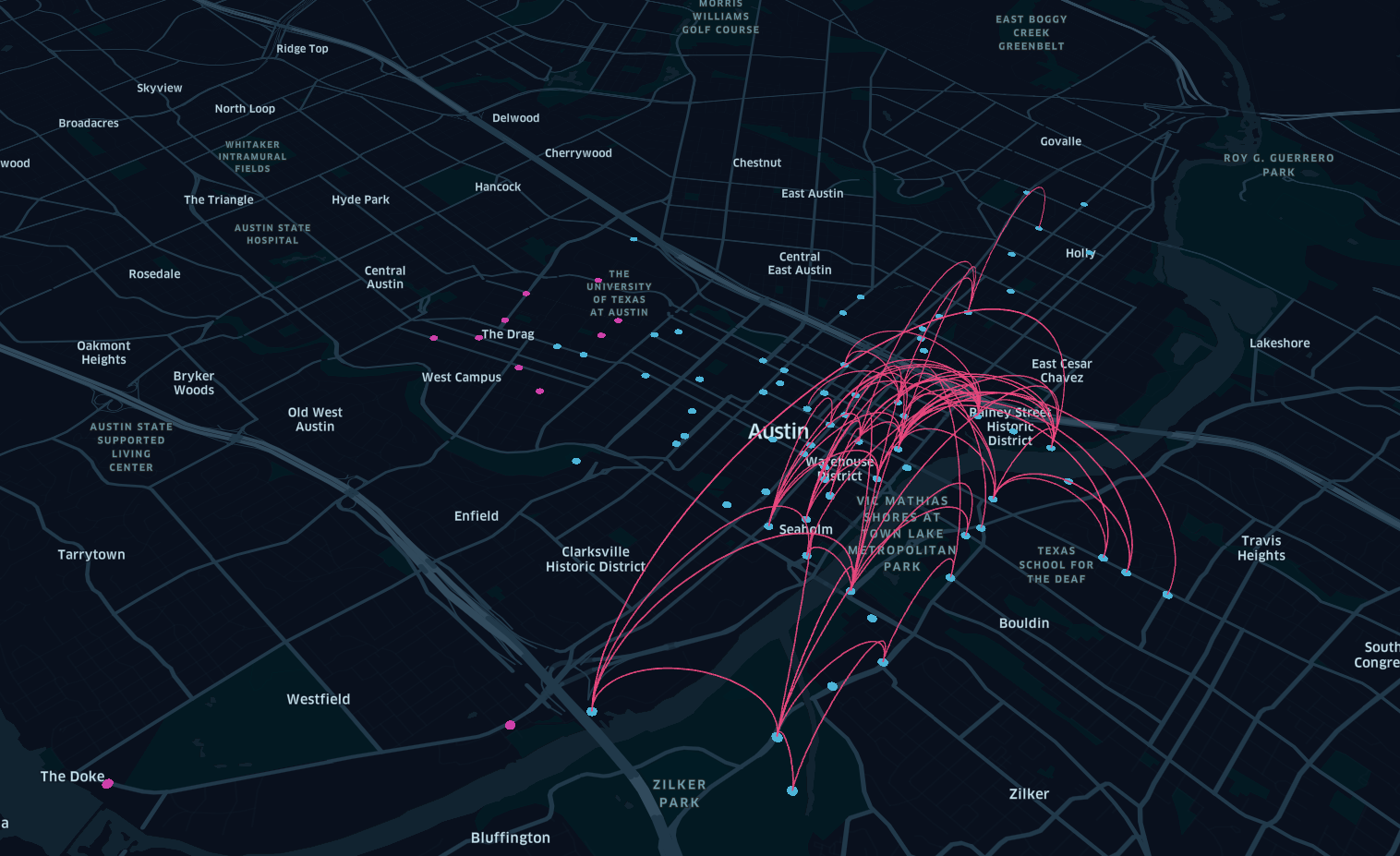 Some of the most popular routes in 2017 were focused to tourist areas, such as routes between Sixth Street and Rainey Street. Ridership was also strong in areas of low-stress bicycle facilities such as the lake hike & bike trail and the Pfluger pedestrian bridge. 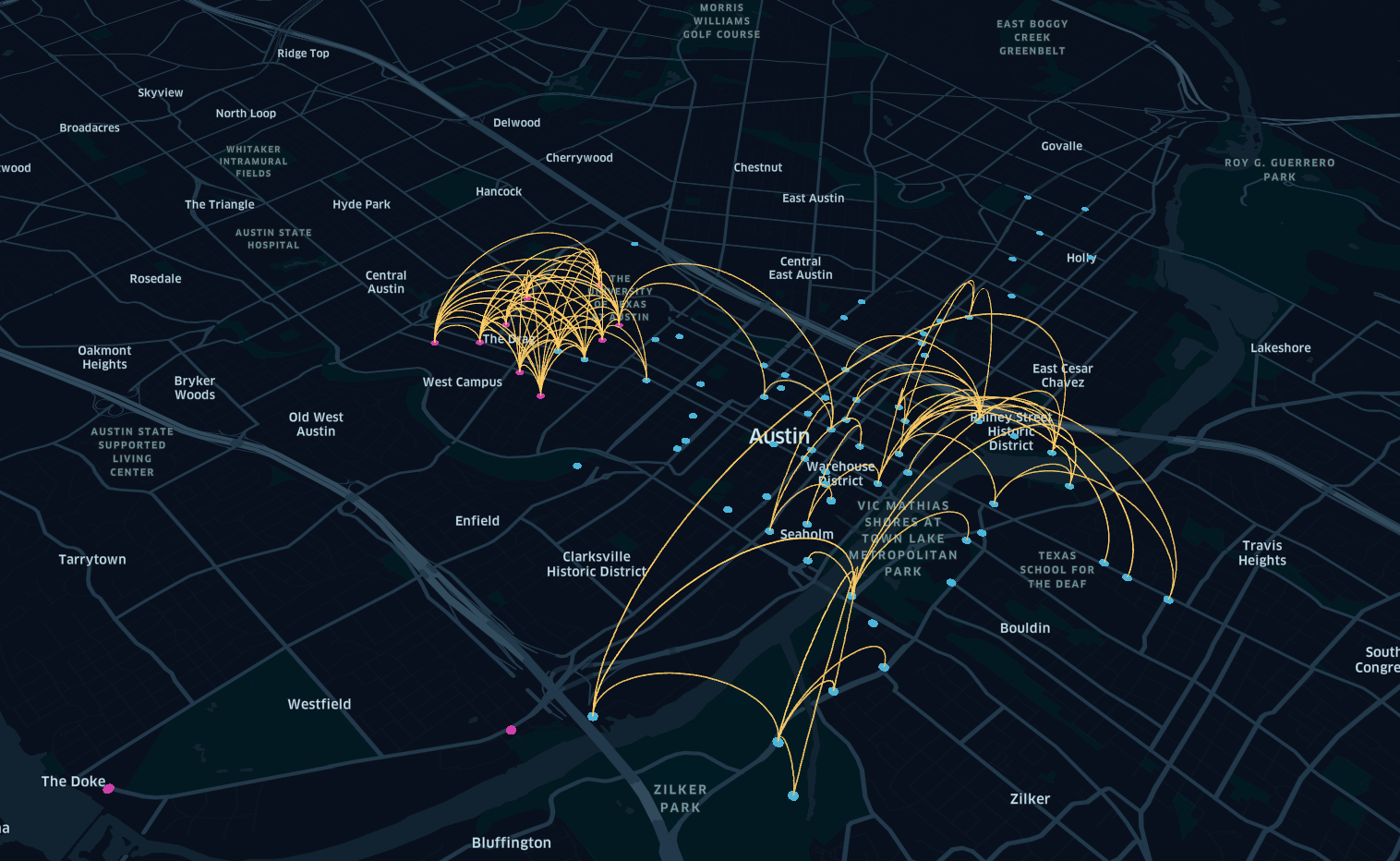 The 2018 expansion showed that all of the new stations are being well used in the campus area. However, only 2 routes from the campus area to the downtown received over 100 trips, both originating from the Jester Dormitory BCycle kiosk. Also, some routes in the Downtown area have reduced their frequency, perhaps due to the rise of new dockless vehicles. The expansion may have also reduced the number of bicycles available in downtown, as bikes are checked out and returned to the campus area due to the influx of new riders. 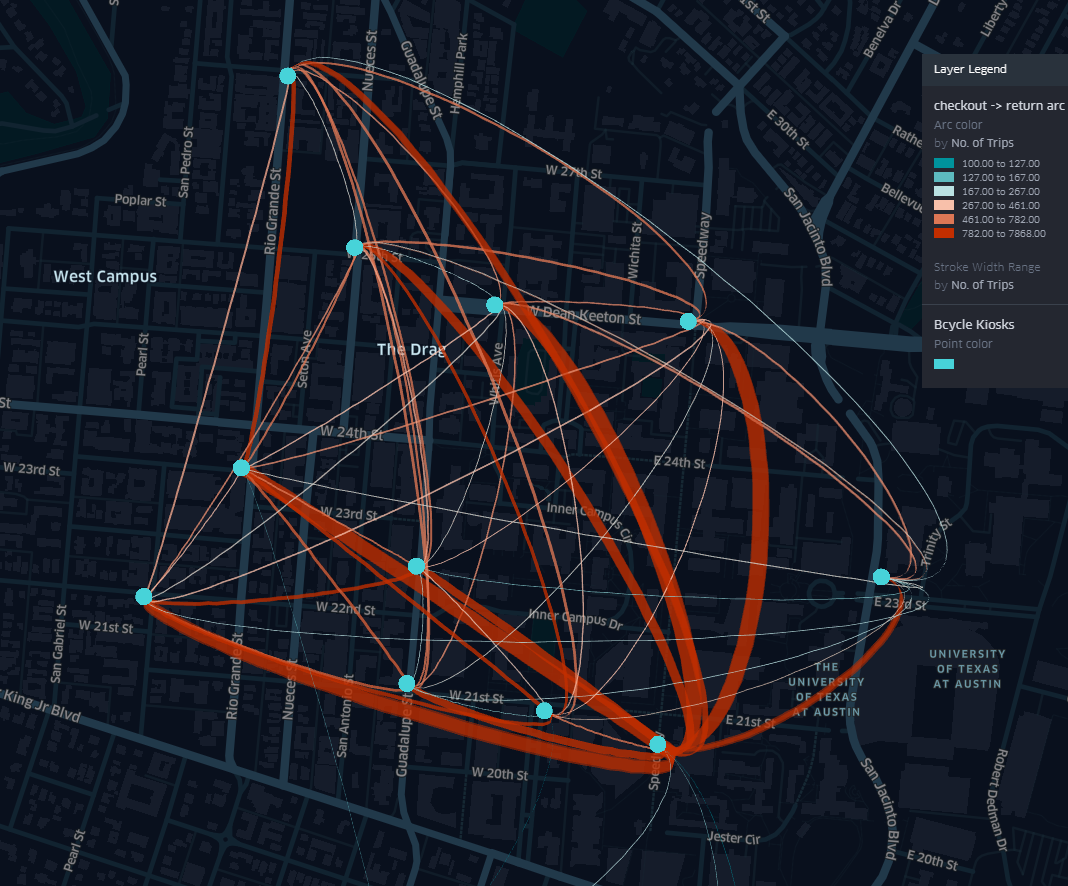 This expansion allowed many students to access free and quick transit across the relatively bike friendly West Campus and Campus areas. The new protected bikeway along Rio Grande Street is now much more utilized with 4 BCycle stations within a block of it. The BCycle expansion, along with the rise of TNCs and other dockless vehicles, has had a definite change to the mode share in the campus community in a short period of time.

The Jester dormitory station, located at 21st st. and Speedway acts as a hub for the BCycles as many trips start and end there. This is a sign that many students use BCycle as transportation to class, either to campus from off campus or from housing on campus to other campus destinations.

The majority (63%) of BCycle trips are now completed by the free UT student membership. The 133,000 trips taken by students actually dwarf the total number of rides by all memberships in 2017 (81,000). Significant decreases to the annual membership package and monthly membership packages should also be noted.

The City of Austin is attempting to double bicycle ridership in three years (2017-2020). BCycle is a great alternative to owning, storing, and repairing your own bicycle. There are some drawbacks to the docked system in that you must live near a kiosk and depending on the type of trip, your destination may also require a kiosk, too. One major problem with the initial rollout of kiosk locations was that very few of them connected residential neighborhoods to the urban core of the city. A few kiosks South Congress and East Austin were close to some residential neighborhoods and were well utilized in 2017. The addition of new kiosks in the campus residential neighborhoods was a welcome addition to the BCycle network for students and locals.

The completion of the speedway pedestrian mall should allow more students a comfortable route to bike to class on. This should also be met with new on-campus BCycle stations. A new kiosk near the 24th st and speedway intersection would alleviate demand on the Jester station and provide a kiosk in the center of UT.

I haven’t been around campus this summer, but during orientation freshman should be given more information on transportation options to and from campus. I’m always excited to try a new bus route or mode of transportation, but many people don’t feel this way and would like the extra motivation and information.

The future of the free student membership is in question as the ridership has doubled with no new revenue to pay for repairs, expansion, and employees. In February 2018, The Daily Texan stated the expansion was part of an 18-month pilot program. However, BCycle is a non-profit and might be able to continue along its current path.

Licensing of dockless vehicles has begun in Austin, and it will be interesting to see how the free BCycles compare to perhaps more convenient transportation options around Austin. The inevitable clash of municipal right-of-way and dockless vehicle companies might also blow up into a cloud of lawsuits at any moment and might just leave BCycle all that remains.