A Compromise that Never was

I’ve lived in West Campus (wampus) for 4 years now. Walking the streets for all that time, you’d never notice the invisible lines that were drawn on a map some 15 years ago that defines what can be built where. I spent last evening at the Austin Planning Commission meeting. There were talks of building heights, FARs, PUDs, indoor crop production, and more.

UNO (University neighborhood overlay), which is simply an acronym for a planning map and a series of rules on what can be built around West Campus. Essentially, you can build taller buildings in exchange for building affordable units. UNO also provides a series of regulations including requiring developers to build large sidewalks and streetscapes.

Earlier this year, an effort was started to re-examine UNO and amend changes to the program to allow for additional affordability and other changes. This effort was capped off with some significant changes recommended by CANPAC (Central Austin Neighborhood Planning Advisory Committee). Many of these changes were accepted by city staff and the planning commission.

However, we asked for more. We wanted to expand the boundary of the “inner West Campus” area to include the west side of Rio Grande street for two blocks (from 24th to 26th streets). By we, I mean the West Campus Neighborhood Association. The planning commission largely agreed with this changes and also moved to eliminate parking requirements in all of UNO. 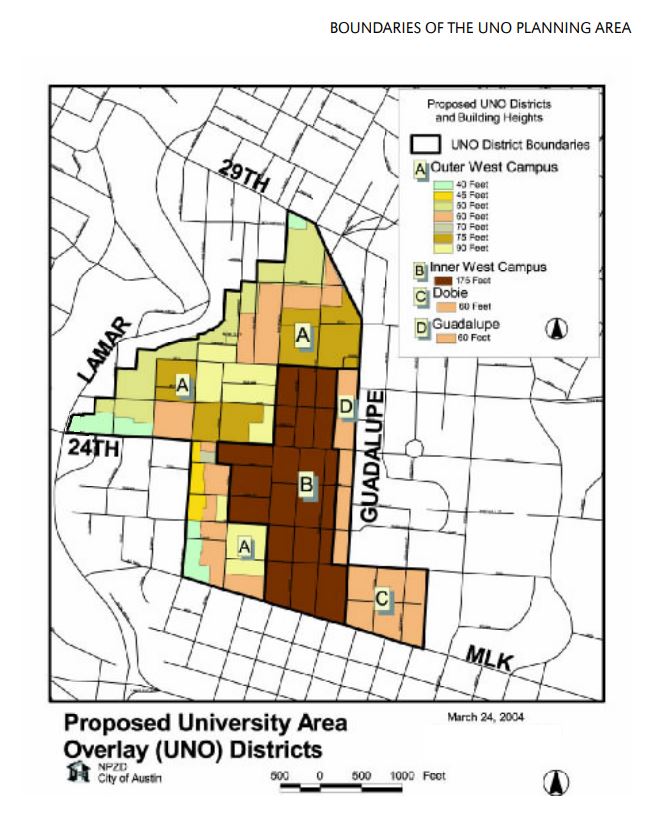 The public comment before these UNO changes were discussed opened a whole can of worms that was incredibly interesting and frustrating at the same time. CANPAC, a group of neighborhood associations, was the group that initially created UNO as an effort to allow more students to live close to campus. At the time, West Campus was largely full of small duplexes and single family households rented out to a smaller population of students. Just use google street view and see imagery from 2007 or 2009 to see the transformation of West Campus into the densest neighborhood in the city.

CANPAC was given a huge amount of power to decide where the lines were drawn along with many other decisions in the process. At the time of UNO’s creation, CANPAC was comprised of 8 neighborhood associations (NA). Only one NA, University Area Partners (UAP), has UNO drawn within their NA boundaries. UAP has historically been controlled by local land owners, builders, and business owners. Few residents of UNO, or students for that matter have had a say in what was “negotiated and compromised” within UAP and CANPAC. Not to mention, neither group has a website or any listing of when their meetings are or who their board members are.

The few times that students were on the board of CANPAC, they are ignored and belittled. Suggestions they have are shot down in the name of a unanimous vote.

CANPAC has been given a great deal of authority when it comes to development in central Austin. Many projects have been rejected and renegotiated before CANPAC. The membership of CANPAC’s board is largely made of home owners and those with business interests in the area. West Campus is diverse and largely full of renters. There has been almost zero input from those who rent and make up a majority of the population of CANPAC’s area. A CANPAC board member described the population of UNO as “transient” during public comment last night. Several “buffer zones” were created along UNO’s periphery, as if UNO needed to be quarantined. This approach to planning is unfair and over represents the views of other neighborhoods on the development of West Campus. Renters deserve a greater voice, they are ignored frequently in city politics because they aren’t deemed to be “invested” in the neighborhood. At the end of the day, neighborhoods are comprised of people, not buildings or zoning overlays. We need to actively search for their voice and input in this process. If we don’t, we will continue to perpetuate this bias and continue our history of segregation.

CANPAC drew UNO to exclude 7 of their 8 member NAs from UNO. This was not a compromise, this was done on purpose. CANPAC’s board members are not published anywhere online. This is not democratic and is symbolic of Austin’s past of segregation.

When considering changes to UNO, we must consider those who live within its boundaries. Those who end up renting from these developments that were built as part of UNO. I applaud the changes made by the planning commission and I hope that the city takes ownership of UNO, rather than delegating power to a small group of central Austinites. This is not about us versus them, this is about inclusion.